The lakes around Tampere have always been very significant for the city as it was founded in a junction of two major lakes - Lake Näsijärvi in the north and Lake Pyhäjärvi in the south. The location was ideal for the emerging industrialisation in the 19th century: Tammerkoski rapids were a major power resource for factories and the lakes offered quite a convenient way of transporting people and cargo, especially in the absence of decent roads. And after Tampere was connected with railroad to southern Finland in 1872, the city was a junction of railroad and ship traffic.

Passenger ships were transporting both people and merchandise and tugboats were pulling barges and raft of logs, and thus bringing raw materials and fuel for the hungry factories. One raw material was above all: wood. Firewood to heat up the city in the winter, lumber for export and logs for large sawmills in the Finnish west coast.

In this context, the need for tugboats was still existing in the late-1920s - although the road traffic was constantly increasing - and that is why the steamship Näsijärvi II was built. Originally the ship was launched in the Lake Pyhäjärvi (the southern lake) on 1929, but it soon became evident, that the ship's draft was too big for the shallow waters of Lake Pyhäjärvi. As a consequence, the ship was transferred to the deep Lake Näsijärvi through the streets of Tampere in the winter of 1929-1930. Quite an effort, one must admit, considering the machinery available at the time.

On the Lake Näsijärvi the ship started to pull barges and rafts of logs for the industrial company called Rosenlew, a major Finnish company with diversified actives. A reminder of those days can still be seen on the ship's funnel: the red star was a logo used by Rosenlew on it's ships - not a reference to the Soviet Union. 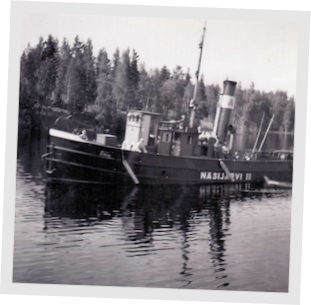 After the WWII, the transportation of wood by water routes was constantly decreasing as the road network and trucks were getting better and better. Due to this shift of transportation, the ship became redundant in the year 1967. In this new situation, there was even a risk that ship would be demolished.

Fortunately a private company bought the ship - in 1971 - with the idea of preserving the ship as a memory from the age of steam. But the maintenance of the ship turned out to be much harder that the buyer had thought and the ship was donated to the city of Tampere in 1976.

However, the city didn't find any use for the ship and, once again, Näsijärvi II was left lying to the port falling into decay. At this point the worried steamship enthusiasts of the Tampere Yacht Club (TaPS) made an application to the city to get the right to use the ship in exchange for the maintenance. This application received positive feedback and the right of use and tenure was handed over to Tampere Yacht Club in 1980.

The long-awaited repairs started soon after getting these rights. 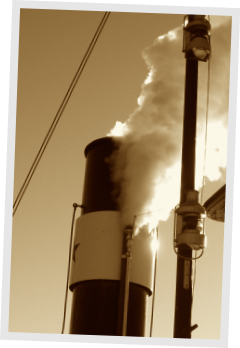 Voluntary workers restored the ship paying no attention to hours spent in the port. Because of this hard work, first cruises were run in the summer of 1981.

Of course, the need of restoration is a never-ending task: the tubes of the steam boiler were completely renewed  in the winter of 1994 and the ship's sewage system was constructed to reach the modern standards in 1995. At this time the ship was also classified as a passenger ship in order to cover some of the expenses by selling charter cruises. These charter cruises were, and still are, significant to keep the ship going.

Perhaps one of the most significant act in the long process of restoration, at least in terms of passenger convenience, happened in 2005, when the oil burners were removed from the engine room, and, after some modifications to the furnaces, wood was reintroduced as the fuel of the ship. The oil burners had been installed in 1963 on account of cost efficiency, but they were hardly suitable considering the atmosphere of a traditional steamship. As a consequence of the removal, the need for diesel generator was no more present (it had given electricity to oil burners) and it could be removed as well. Notably lesser demand of the electricity could now be satisfied with batteries and an inverter producing 230V. Welcome silent cruises and biofuelled travelling!

Here are the main points of the ship's history. Of course, almost 90 years of history cannot be told in these few rows, and lot of persons and events have been left out, but if you have any questions, please do not hesitate to contact us!

But one thing is for sure: The best way to support the restoration work and get familiar with the ship is to reserve your own cruise!